Viracon Glass a Canvas for Super Bowl Imagery in Indianapolis

Owatonna, MN – At the site of Super Bowl XLVI in Indianapolis, IN sit four structures featuring Viracon glass enhanced with eye-catching images for the event.

Designed by HOK architects, the J.W. Marriott Hotel in Indianapolis is the largest J.W. Marriott in North America. Its construction significantly changed the skyline of the city and its glass exterior features Viracon VRE9-46 Radiant Low-E Insulating Glass. This application gives the building exterior a colossal look, standing prominently in the skyline.

“My family and I were on the way to the NFL Experience and were thrilled to see the iconic Super Bowl imagery on our Viracon glass, including Lucas Oil Stadium,” says Jeff Sweet, Architectural Sales Representative for Viracon.

Football’s biggest event will take place at Lucas Oil Stadium which was designed by HKS architects. The stadium features Viracon VE1-2M Low-E Insulating Glass. The facility opened in 2008 as the new home of the National Football League’s Indianapolis Colts. It features a retractable roof, seats 67,000, and already boasts an impressive resume, having been named the 2009 Sports Facility of the Year by Street and Smith’s SportsBusiness Journal.

“The four projects were considered to be high-profile and the added excitement of the Super Bowl brings an extra layer of pride to everyone at Viracon,” says Jeff Sweet.

Download
At the site of Super Bowl XLVI in Indianapolis, IN, sit four structures featuring Viracon glass and enhanced with eye-catching logos and signage for the event. Lucas Oil Stadium, The J.W. Marriott Hotel, the Indiana Convention Center and a walkway linking the hotel and convention center are all Viracon-supplied, and are all adorned with giant-sized Super Bowl decals. 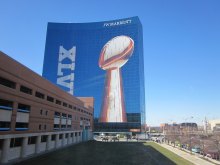 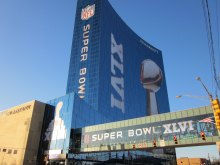 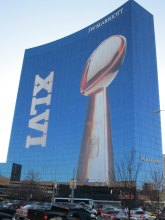 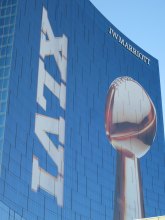 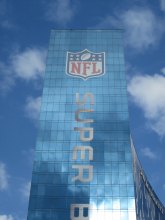 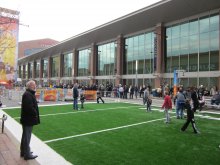 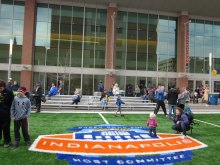 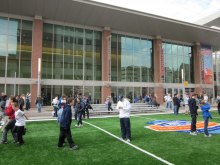 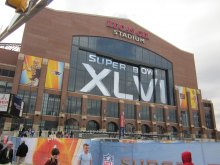 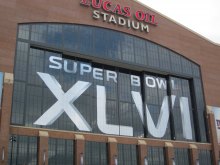 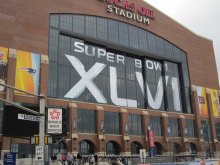