WICHITA, KS… One of the most iconic of Las Vegas’ resorts, the Venetian has been open and welcoming guests since 1999. The destination recently underwent a rooftop pool deck renovation project which involved the complete removal of planters, decorative items, and trees, and the pool deck was then stripped down to the original concrete structure and entirely remodeled.

“About three acres of structural deck was exposed before the waterproofing system was installed,” says Cid Caba, Waterproofing Consultant, Independent Roofing Consultants. “Pool decks are incredibly challenging and here, we had to work to a very, very tight schedule as the construction pace is phenomenal. We had to choose EPRO: It sets up extremely quickly, installation time is fast, and everything worked out really well.”

Utilizing a revolutionary Redundant Field-Installed Composite Design philosophy, EPRO’s E.Series systems represent the evolution of its products over the past 20 years. This evolution is demonstrated in the three types of E.Series systems: E.Protect+ is used when performance is paramount.

As the product was installed during the winter, weather was not ideal; it was often rainy and damp. To ensure that the system was up to the highest standards, continuous vector testing was conducted for potential breaches or issues during and after installation. EPRO product was also more flexible than others selected, making it ideal for the Vegas extremes in temperature – a year-round occurrence that has the potential to affect the structural integrity of building systems.

“Another benefit to the EPRO system was that it has the right elasticity to compensate for thermal movement – a must in this location where it gets extremely hot during the day and can cool off significantly at night,” says Caba.

The debris and dust from the specific area in which the Venetian is located was another challenge that only a product like EPRO’s E.Protect+ could successfully mitigate.

The Venetian pool deck was completed in June 2019. The architect was JZA+D, and the general contractor was Team Construction. Installation was completed by Southwest Specialty Contracting, and the waterproofing consultant was Independent Roofing Consultants. 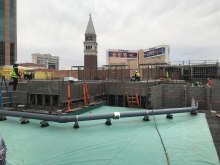 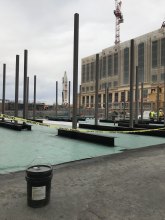